Out of This World Party

This week we held an Out of This World party for ages 4-8.  We had decorations, 3 crafts, and 2 games.  Due to space, we registered 30 kids.  For decorations, we hung inflatable planets from the ceiling. 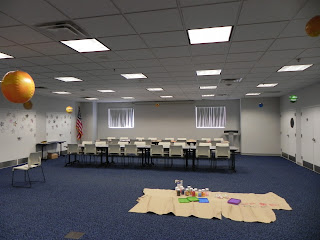 Our decorations and set-up
Games
Every party needs games.  We were looking for easy ones that did not require staff supervision, but were still fun.  Our first game was our flying asteroid game.  We had balls made of crumbled aluminum foil and tossed them into a black cauldron that we had from previous Halloween parties.  This was quite popular and the last boys to leave were really excited to take the asteroids home to make their own party game.

Our second game was our space shuttle landing game.  We measured out masking tape on the floor and marked off the feet with a ruler.  To decorate, we added circles with various planet names on them.  Kids took a paper airplane space shuttle and threw it to see where it would land. 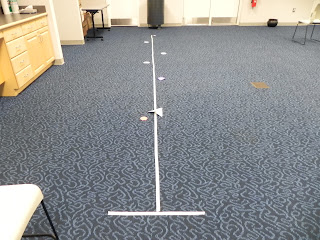 Space shuttle landing game
Craft #1-Make your own solar system
We started off with giant black posterboard circles for each kid.  We put out pictures of various constellations to give kids ideas, but also encouraged them to make their own designs (peace signs, their initials, etc.).  With rulers and Crayola gel markers we had kids draw their designs.  Then we had glow-in-the-dark puffy paint for them to add the stars.  I suggested adding stars at the joints of the picture, but some had more and some had less. 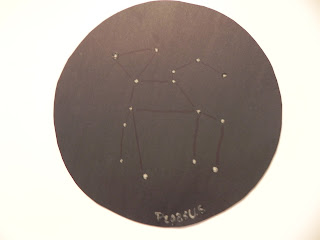 Make your own solar system


Craft #2-Solar system sticker scene﻿
We purchased the sticker packages from Oriental Trading.  Each kid got one set of stickers and a cardstock square to mount their design on. 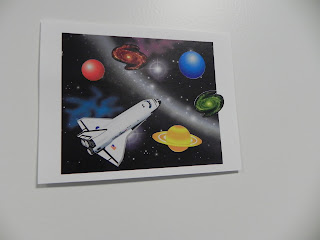 Craft #3-Star sand art bottle keychains
We purchased this craft from Oriental Trading.  We had sand left over from previous projects and used it to make the keychains.  (A little bit of sand goes a long way.  We have used the same bottles for the past 8 or so years and haven't run out.)  The kids loved designing their keychains.  The problem that we ran into here is that there was only 1 funnel per package so we could only make 3 keychains at a time with our 3 packages.  If you do this and there is a way to get extra funnels to fit your project, do so.

All-in-all the program turned out good and is definitely one to do again.  While we did run into a line at the sand art, the kids were really patient and didn't mind waiting.  Plus, we had the 2 games that they could play while they waited. 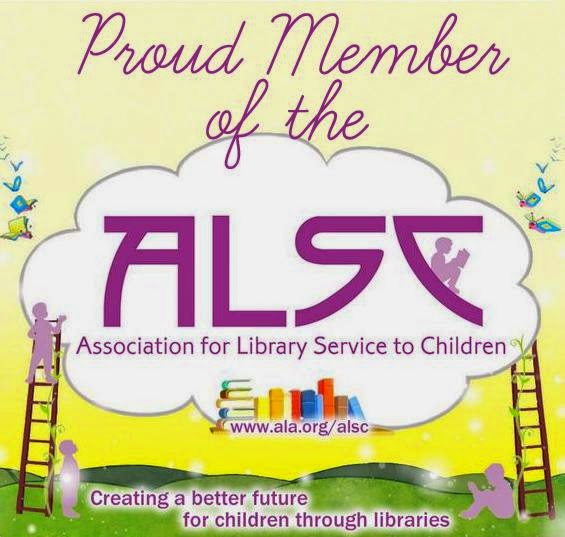